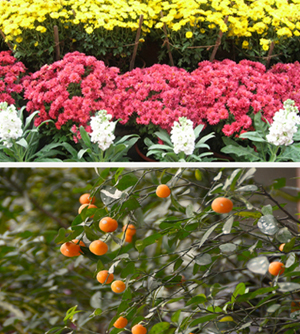 Within the boundaries of the Institute, there are other green spaces that house a range of fruit trees, flowering plants, leaved plants and creepers.

Sidewalks encircle the entire Institute complex. Two important thoroughfares – the Southern Avenue on the north-west side and the Gariahat Road on the east, converge at the Gol Park Circle. Among the sidewalks, the one on the Southern Avenue is the broadest and offers the best location for horticulture work. The Institutes maintain the entire sidewalk and keeps it very clean.

GREEN ISLAND AT THE MEDIAN OF THE SOUTHERN AVENUE 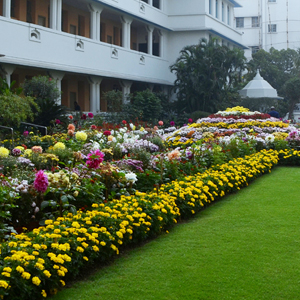 This is maintained by the Institute and houses large number of trees including palm and other fruit trees.

The Institute maintains the garden inside the Circle. Flowering plants adorn both sides of the pathways and fruit trees on the western side of the garden. Swamiji’s statue rests on a raised pedestal at the centre of the circle and faces the north-east side. Decorative arc lights and six large sodium-vapour lamps hoisted on a tall column at the centre illumine the park at night.

The horticulture department plays a stellar role in keeping the Institute and its surroundings green and beautiful. The greenery absorbs carbon-dioxide, carbon monoxide and other harmful gases and release oxygen. Trees help maintain a cool and shady environment conducive to the educational and cultural objectives of the Institute.